Josh Miller was hurrying into the Fortinos supermarket at Lawrence Square Tuesday afternoon when he noticed there was something “yelping” from inside a nearby garbage can.

As he approached the can, he realized the noise was coming from a plastic bag. At first, he thought it may have been a raccoon or a squirrel.

“I saw that the bag was kind of moving,” Miller said in an interview. “I was a little freaked out.”

He attempted to free the animal and found it was wrapped in five separate plastic bags, each one tightly knotted.

It was around 3 p.m. on Tuesday — with the temperature nearing 30 C — and the bags felt “boiling hot.”

Once Miller tore through them, he found a three-month old Yorkshire Terrier inside. The female puppy was dehydrated, on the verge of suffocation and soaked in urine.

“It was a pretty sickening feeling,” Miller said. 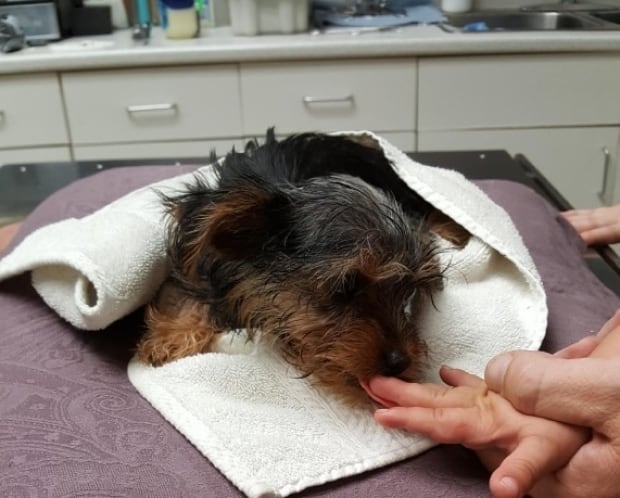 Josh Miller, who found the abandoned dog, rushed it immediately to a nearby veterinarian. The dog survived. (Submitted)

He quickly drove to a nearby veterinarian, who treated the puppy, and besides dehydration, found no other apparent injuries. Miller said the vet told him the puppy would not have survived much longer in the bags.

He was also told the dog is a purebred Yorkie and has an identifying microchip. However, the microchip has not been registered.

The dog has been adopted by friends of Miller’s, who he said will be registering the animal and making sure it is healthy.

“It’s a lot of generosity on their part,” he said. “I’m just happy I was there at that time.”

The Ontario Society for the Prevention of Cruelty to Animals would not comment specifically about this case.

The agency encourages anyone who encounters evidence of animal cruelty to call its hotline at 310-SPCA.

Help for handing over animals

While staff at the City of Toronto’s Animal Services regularly see dogs and cats abandoned at their offices or in parks, manager Mary Lou Leiher said this situation is “rare.”

“The cruelty of it is so hard to understand,” she said in an interview.

The City of Toronto tries to discourage people from abandoning their pets in any manner, but Leiher said there is help available.

“We will talk about alternatives, such as giving the pet to a family member or friend, but we do want people to know that if you’re really in a tough spot and need to surrender the animal quickly, we will offer a barrier-free process.”

“We would never refuse to accept an animal.”

Puppy Found Wrapped in plastic bag is a Teacup Yorkie

New Jersey couple had 276 dogs living in their home; SPCA to meet with prosecutors on charges

My wife asked me to help cut our Yorkie hair…..